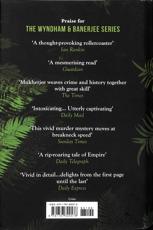 Death in the East - Sam Wyndham

** Selected by the Telegraph, FT and Guardian as one of the best crime books of 2019**

**'A skilfully blended dual narrative: twice the intrigue, twice the fun. Mukherjee is at the top of his game' Mick Herron, author of the Jackson Lamb series, on Death in the East**

**'The gloriously atmospheric Death in the East is his [Mukherjee's] best book so far, a cracking read' Scotsman**

**'The perfect combination of mystery and history' Telegraph**


Calcutta police detective Captain Sam Wyndham and his quick-witted Indian Sergeant, Surrender-not Banerjee, are back for another rip-roaring adventure set in 1920s India.

1905, London. As a young constable, Sam Wyndham is on his usual East London beat when he comes across an old flame, Bessie Drummond, attacked in the streets. The next day, when Bessie is found brutally beaten in her own room, locked from the inside, Wyndham promises to get to the bottom of her murder. But the case will cost the young constable more than he ever imagined.

1922, India. Leaving Calcutta, Captain Sam Wyndham heads for the hills of Assam, to the ashram of a sainted monk where he hopes to conquer his opium addiction. But when he arrives, he sees a ghost from his life in London - a man thought to be long dead, a man Wyndham hoped he would never see again.

Wyndham knows he must call his friend and colleague Sergeant Banerjee for help. He is certain this figure from his past isn't here by coincidence. He is here for revenge . . .

Praise for the Sam Wyndham series:

'Mukherjee brings sardonic wit to his portrayal of British rule in India, and the action is perfectly paced.' Daily Mirror

Harvill Secker is a firm with a long and illustrious history. Originally, Harvill and Secker were two separate companies, both with a particular interest in publishing international literature. The two imprints were formally joined together in 2005 but Harvill Secker's first incarnation, Martin Secker Ltd, was founded in 1910. Both as separate firms, and together as Harvill Secker, the house has enjoyed the contribution of many talented and committed authors, editors and other supporters over the years. It has been lucky enough to publish twenty Nobel Prize-winners, four Booker Prize-winners and to survive many changes of name and address, a variety of owners and mergers, a famous fake, an author who claimed his overdue manuscript had been eaten by a crocodile, the Blitz, a direct hit on a warehouse, a handful of libel actions, bankruptcies and a trial that rewrote obscenity laws.

The Adventures of Sherlock Holmes

Where the Crawdads Sing