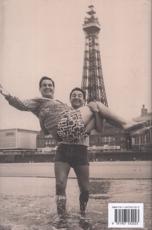 The Sunny Side of Winters A Variety of Memories

‘Why did we get into showbiz? One reason may have been the thought of working with beautiful show girls and meeting glamorous actresses' Mike Winters has been fortunate enough to have lived and worked part of his life in the same circles as a lot of famous people. But this was a far cry from when he was growing up in Tottenham, when his dream was to play rugby for England. Instead, Mike, with his brother Bernie, topped the bill at the London Palladium, and most of the major theatres in the UK. They had their own highly-successful TV series, running for 15 years, and were honoured with a Command Performance in front of the Queen and Prince Phillip. Little did Mike know that he'd later get to know her son. And Mike's view of this? ‘Stuff just happens.' In this fascinating, unpretentious account, Mike shares his precious memories and stories. They cover many years and involve an eclectic mix of stars and characters: Sean Connery, Cary Grant, Helen Mirren, Dusty Springfield, Jack Benny, mobster Meyer Lansky, Jimmy Tarbuck and The Beatles (who appeared on their show three times!), as well as sports personalities such as Don Revie, Matt Busby and Malcolm Allison, to name but a few. These were different days, when entertainers at all levels mixed together. Mike sung, danced, duetted, joked around with, did impressions of, or simply shot the breeze with, many talented men and woman in Variety and Television. Funny, charming and revealing, The Sunny Side of Winters is a heartfelt celebration of life, celebrity and brotherhood. Mike Winters has written four book, two novels, the authobiography of Angelo Dundee (with Angelo Dundee), and Axis of Greatness about Dundee, Ali and Sugar Ray Leonard (published by JR Books). He lives in Florida.