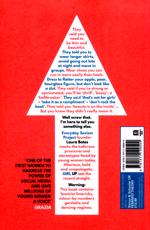 They told you you need to be thin and beautiful.

They told you to wear longer skirts, avoid going out late at night and move in groups - never accept drinks from a stranger, and wear shoes you can run in more easily than heels.

They told you to wear just enough make-up to look presentable but not enough to be a slut; to dress to flatter your apple, pear, hourglass figure, but not to be too tarty.

They warned you that if you try to be strong, or take control, you'll be shrill, bossy, a ballbreaker. Of course it's fine for the boys, but you should know your place.

They told you 'beauty is on the inside', but you knew they didn't really mean it.

Well screw that. I'm here to tell you something else.

Hilarious, jaunty and bold, GIRL UP exposes the truth about the pressures surrounding body image, the false representations in media, the complexities of a sex and relationships, the trials of social media and all the other lies they told us.

'Bates takes a myth-busting approach to body image, food, sex and advertising, and is particularly good at boiling down feminist language into a snappy, everyday vernacular without diluting its power.' Metro

'Essential reading for young women and girls, Girl Up is set to become a key guiding text for the next generation like The Beauty Myth and The Feminine Mystique have for preceding generations. Morning Star Online

It's hardly headline news that feminism can be funny. But, heavens, is it refreshing to see it done as well as it is [in this book]. Telegraph

'Girl Up is something between a self-help book and a bracing love letter to today's teenage girls... I wish I'd had Girl Up when I was growing up. I could have used such no-nonsense survival guide.' Sunday Times

'Girl Up will be the first book on feminism many young women will read.' Guardian

[Girl Up] tackles all the propaganda that women get bamboozled with from childhood. From the myth of the 'ballbreaker' in the office to the 'dangers' of short skirts, Bates is funny, piercingly astute and will have you furious and politicized over the impact social media, pornography and advertising have on our bodies.' Stylist

'If you have a daughter or a niece or a younger sister or a god-daughter, buy it for them now… the book is an absolute must for girls navigating our hyper-sexualised, deeply sexist culture.' The Pool

'Feminist writer Laura Bates returns with another hard-hitting but hilarious book which exposes the truth surrounding pressures on body image, false representations in the media and lots of issues very relevant to girls today. This no-nonsense guide to being a girl in 2016 and is one all teen girls should read.' Red magazine

'For any woman who is sick of being told how to act, how to dress, or how to ward off unwanted advances, this book could be for you. Independent

'This book is fabulous. It is inclusive and empowering. It is funny and frank and, as actor Emma Watson writes in the preface, "not for the faint-hearted". It is the kind of sex and life education you wished you had at your at your disposal when you were 14.' Irish Times