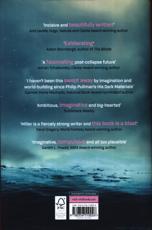 After the climate wars, a floating city was constructed in the Arctic Circle. Once a remarkable feat of mechanical and social engineering it is now rife with corruption and the population simmers with unrest.

Into this turmoil comes a strange new visitor - a woman accompanied by an orca and a chained polar bear. She disappears into the crowds looking for someone she lost thirty years ago, followed by whispers of a vanished people who could bond with animals. Her arrival draws together four people and sparks a chain of events that will change Blackfish City forever.

DISTURBING, POWERFUL AND FEARLESSLY IMAGINED, BLACKFISH CITY IS A MESMERISING NOVEL FROM A REMARKABLE NEW VOICE IN SCIENCE FICTION

'Sam Miller is a fiercely strong writer, and this book is a blast' - Daryl Gregory, World Fantasy
Award-winning author

'I haven't been this swept away by imagination and worldbuilding since Philip Pullman's His Dark Materials' - Carmen Maria Machado, National Book Award-nominated author of Her Body and other Parties

'Damn near perfect' - The Book Smugglers

'This is the kind of swirling, original sci-fi we live for' - B&N Sci-Fi and Fantasy Blog

Orbit is the place to go for outstanding Science Fiction and Fantasy. With a fantastic range of international bestsellers, including Jim Butcher, Trudi Canavan and Brent Weeks, and exciting new talent such as Ann Leckie, James S. A. Corey M. R. Carey and Claire North, Orbit is one of the most dynamic and successful imprints in the field. With a dedicated team sharing a passion for speculative fiction, Orbit is committed to broadening the audience for SF and Fantasy. Science Fiction and Fantasy is becoming increasingly popular within mainstream readership and Orbit is at the forefront of the action, staff in hand.